Fowl frenzy on the Farm continues 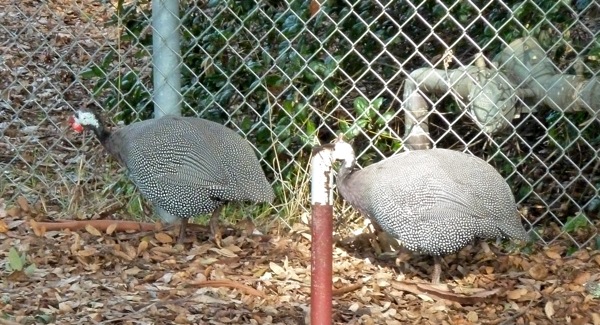 In was last August that the Dawn Jogger thought she was seeing things when a turkey passed in front of her just south of Sand Hill Road on the Stanford campus. Today she encountered another “show” as two hen turkeys had somehow gotten loose on the wrong side of their enclosure and where running up and down trying to figure to out how to get back with the rest of their flock.

How they had escaped was a matter of discussion among the two bicyclists who had stopped to watch the attempted corralling, along with various members of the Stanford Sheriffs department. Turkeys can fly, but not very high. The fence looked tall enough to contain them. Squeezing through a slight opening in the gate seemed out of reach to the birds’ brain capacity – and they certainly weren’t figuring out how to get back in. There was some conjecture that it was a planned “Thanksgiving escape” even though they didn’t much look like the eating kind of Bird.

Inside the enclosure a Tom turkey (photo above, left) was strutting his stuff on top a pile of shavings, seemingly unconcerned, although the rest of the hens were following the two escapees up and down the fence.

This was all in all, a fun way to begin her loop around campus. And she’s happy to report that the two hen turkeys finally made it back into the enclosure, unharmed if not a bit aflutter…

This entry was posted in Dawn jogging and tagged turkeys on Stanford campus. Bookmark the permalink.