End of the year, beginning of new path? In either case, it’s a wrap!

Posted on December 31, 2011 by lindahubbardgulker 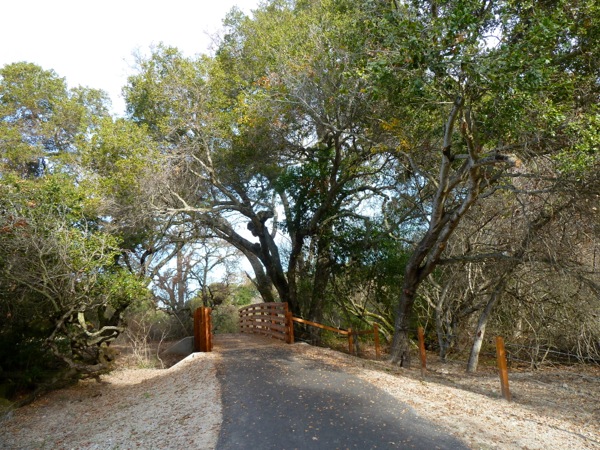 The Dawn Jogger thought a bit carefully about where she was going to jog on this last day of 2011, and therefore the last day of Dawn Jogger 2011.The excitement was that she was actually jogging, as she had done earlier in the week, while still being cautious with the cranky knee.

Her instinct initially was to combine two favorites, Lake Lagunita and Big Dish. But as this was the end of the year along with the end of Dawn Jogger 2011, she decided to take a new path.

Last fall the jogging/walking path along Alpine Rd. to Arastradero was re-paved and slightly altered. This was the route she and the male DJ would take when they resumed their Saturday morning outings following his treatment for glioma and the various side effects they had to navigate. The male DJ would walk and she’d jog and then they would have breakfast Mike’s Cafe. So taking the slightly new path was also a way to remember the many, many years of their hiking together with trusty dog Cassie along with the life they had forged together post cancer diagnosis.

When she was in New York at New Year’s last year, the female DJ had started tracking her daily mileage though an online service called Map My Run. Her goal was to get to 30 miles a week, and while most of the time she didn’t make it, she didn’t fall too far short. She added it all up and found she walked/jogged/hiked 1,440 and 1/3 miles in 2011.

The route today was only 3.5 miles but she felt ever step as muscles woke up that aren’t used as much in walking. She felt good.

Posted on December 30, 2011 by lindahubbardgulker 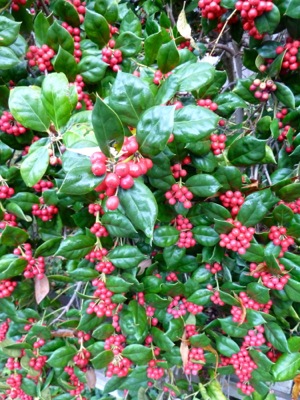 The Dawn Jogger stayed in central Menlo Park this morning on a four mile neighborhood walk and everywhere she looked there was holly. Not all holly looked the same and she realized when she returned home, she’d photographed a half dozen  holly that looked different, at least to her. She chose her favorite…

In the pink with a dash of blue and white

Posted on December 29, 2011 by lindahubbardgulker 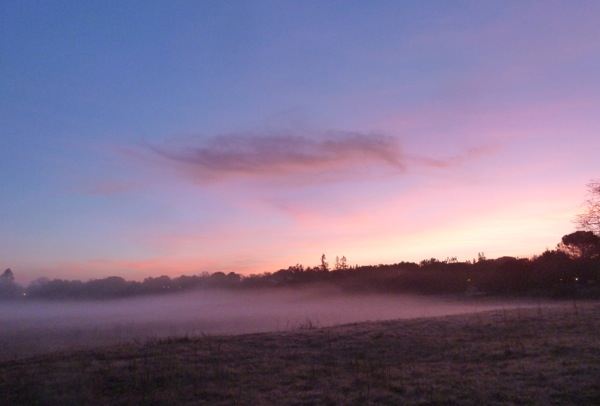 A pink sky greeting the Dawn Jogger again this morning. Against the blue sky and with a swath of white tule fog over Lake Lagunita, it almost looked like a flag. Sun still taking its time to come up…

And a sea of pink descended overhead

Posted on December 28, 2011 by lindahubbardgulker 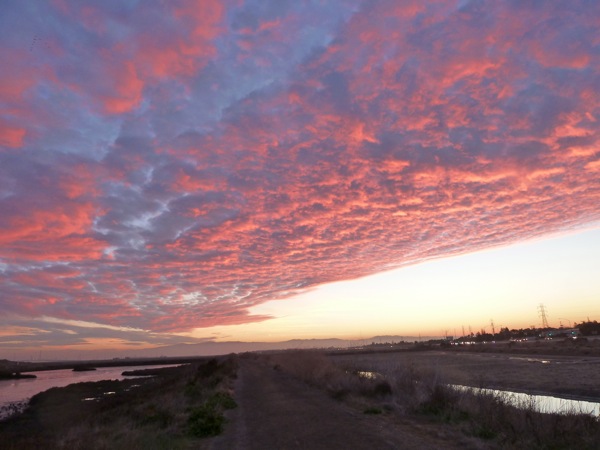 That’s how the Dawn Jogger felt this morning when she set out pre-dawn for her Bedwell Bayfront loop walk. This relatively new Wednesday ritual prior to a Pilates class nearby rarely disappoints. At this time of year, just need to be a bit more bundled up…

Who forgot to bring the Christmas green?

Posted on December 27, 2011 by lindahubbardgulker

That’s what the Dawn Jogger thought this morning when she walked the Dish. There are tiny remnants of green from the October rain but the overall picture is stubby brown. Hardly typical for this time of the year…

The morning after at a favorite Peninsula trail

Posted on December 26, 2011 by lindahubbardgulker

The Dawn Jogger made sure she had all her stuff together before she left Christmas dinner last night. But when she got home she realized she had left her camera. So this morning found her heading back up the Peninsula to get the camera (and the wonderful photos of all those beautiful girls – sorry boys! – recorded on the chip).

Once at the northern reaches of the Peninsula, she decided to take a brisk walk along Crystal Springs trail where she saw a lovely sight at trail’s head – a tree someone had decorated with ornaments. Feeling virtuous having done a 5-mile out and back…

Posted on December 25, 2011 by lindahubbardgulker

Grace awoke this morning and announced that Santa had whispered “Merry Christmas” to her. She found he’d left a gigantic doll house for her and a rocking horse with a jaunty baseball head for James. Before the excitement of the morning, there was time to post under the tree. The Dawn Jogger is one lucky grandma…