Having the guts to let her fly 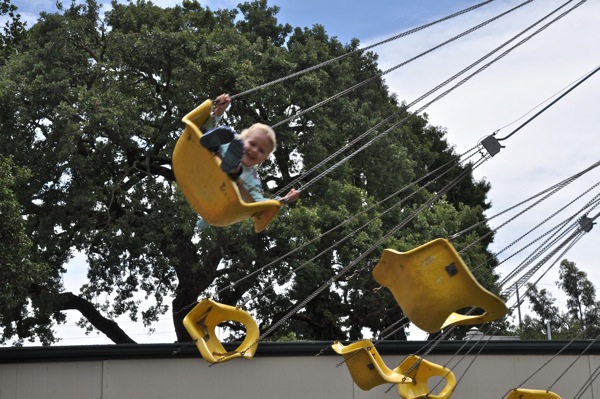 The Dawn Jogger was up early this morning for a five-mile jog through the Stanford campus in anticipation for a Grace overnight. (Make that Grace the daredevil.) It’s the weekend of the annual Nativity Carnival, which friends had assured her had a fair number of kiddie rides. With baby James a week old, it was good timing.

And indeed the kiddie rides were plentiful. The responsible grandparent aka DJ steered her to the merry-go-round, the caged ferris wheel, the rocket ships, and car ride (biker Grace chose a motorcycle). Together the rode the Dragon mini roller coaster (Grace loves the roller coaster at the Oakland zoo, so that was easy) and the high ferris wheel.

But Grace remembered a ride that the DJ had not suggested, a swing ride much higher and faster than the one she’d gone on at Happy Hollow some months ago. “I want to go on the swings,” was the request. So they walked back to the corner of the Carnival where the swing ride was, and she just made the height requirement. It reminded the DJ of when she first went to Disneyland and was tall enough for the Autopia ride even though, by age, she was only marginally equipped to handle the steering. (That was before the ride had a rail down the center, which made the “driving” easier.)

So what is a grandparent to do? This one repeated over and over, “Hold on tight,” as she oversaw the straps that [supposedly] were to keep riders safe, and then she held her breath while she watched the 3 1/2 year old soar high (and seemingly endlessly – had the ride operator fallen asleep?). The kicker: It was the only ride where she grinned from start to finish…

This entry was posted in Grace and tagged Nativity Carnival. Bookmark the permalink.

1 Response to Having the guts to let her fly